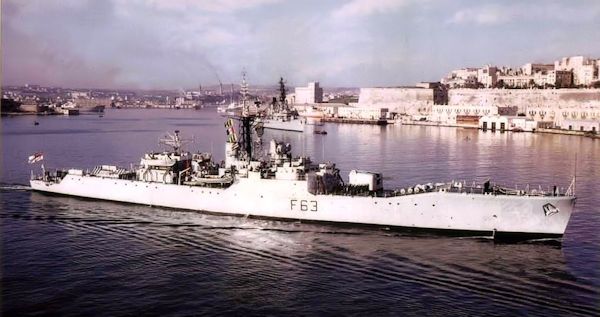 The details of command appointments are culled from various sources and are the dates of appointment or joining. These dates may be subject to possible errors and if so any corrections would be gratefully received by contacting the Webmaster.
Many Thanks. 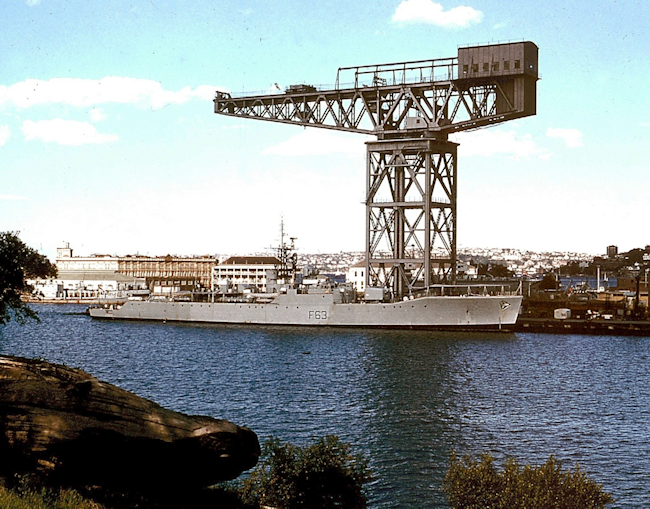 HMS SCARBOROUGH 1958 alongside at Garden Island, Sydney, NSW.
She had been taking part in "Operation Grapple" during the Christmas Island Hydrogen Bomb Tests.
Photograph taken by Roger Eastwood, and kindly submitted by his son Geoff Eastwood for the unofficial RAN Centenary 1911-2011 photostream at Horatio J Kookaburra's Flickr Account. 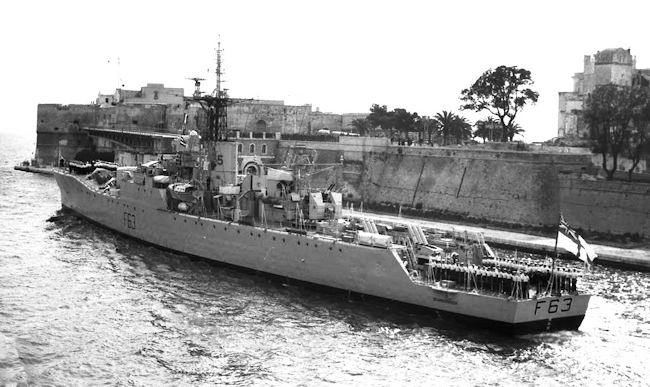 H.M.S. Scarborough led a very busy life, as the Leader (Captain F5) of the 5th Frigate Squadron she circumnavigated the globe visiting many countries and taking part in some important world events. Including the Atomic Bomb Tests (operation Grapple) at Christmas Island in the Pacific (1958). Besides showing the flag H.M.S. Scarborough was involved in the usual naval training exercises and patrols including Icelandic patrols during the Cod War. From April 1964 until paying off in 1972 H.M.S. Scarborough was Leader of the 17th Frigate Squadron which included H.M.S. Tenby, H.M.S. Torquay and H.M.S. Eastbourne (Dartmouth Training Squadron) responsible for providing sea training for young officer cadets, engine room artificers and Royal Marine officers from Britain and also officer cadets from many other countries.
Some more photographs relating to the "Around The World" commission kindly provided by the Royal Navy Museum Portsmouth can be found by visiting the following pages:
Ship's Company Photograph ¦ Circumnavigation Chart ¦ HMS Scarborough at Sydney ¦ Crossing The Line Certificate ¦ 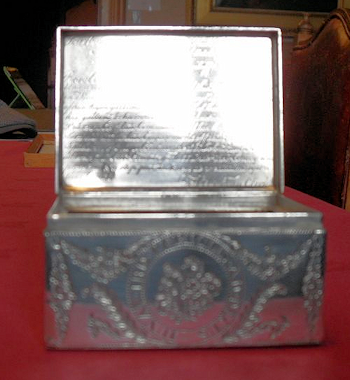 During her many commissions and naval duties she managed to visit her adopted home town in August 1962, June 1971 and May 1972 when she paid a farewell visit prior to decommissioning, leaving in the town's safe keeping the 'Freedom of Scarborough' casket presented to Thomas Piercy, Commanding Officer of H.M.S. Countess of Scarborough, following the engagement with a squadron of ships commanded by John Paul Jones off Flamborough Head in 1779.